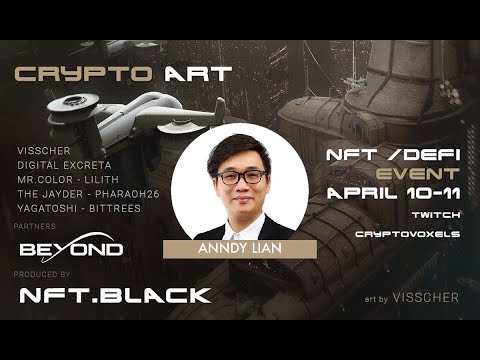 Anndy Lian and TokyoCrypto catch up at the Crypto Art NFT Event on Twitch, 10 April 2021. This event is produced by NFT.Black and partnering with Beyond Finance.

NFT stands for non-fungible token, are pieces of digital content linked to the blockchain, the digital database underpinning cryptocurrencies such as bitcoin and ethereum. Unlike NFTs, those assets are fungible, meaning they can be replaced or exchanged with another identical one of the same value, much like a dollar bill.NFTs aren’t exactly new. CryptoKitties, a digital trading game on the cryptocurrency platform Ethereum, was one of the original NFTs, allowing people to purchase and sell virtual cats that were both unique and stored on the blockchain.

NFT catches the trend this quarter and is the most talked-about topic currently in the crypto-verse. It’s popularity is in part driven by the fact that anybody can tokenise their work to sell as an NFT but interest has been fuelled by recent headlines of multi-million-dollar sales. On 19 February, an animated Gif of Nyan Cat – a 2011 meme of a flying pop-tart cat – sold for more than $500,000. A few weeks later, musician Grimes sold some of her digital art for more than $6m.

It is not just art that is tokenised and sold. Twitter’s founder Jack Dorsey has promoted an NFT of the first-ever tweet, with bids hitting $2.5m. Christie’s sale of an NFT by digital artist Beeple for $69m (£50m) set a new record for digital art.

In the event, Anndy shares his views on crypto in general. TokyoCrypto also asked Anndy about NFT, DeFi, on-chain custodian and more.

At the end of the event, Anndy brought up an interesting point. "Combine cross-chain capabilities from tech companies like CZZ (Classzz.com) with NFT multi-chain marketplace like Hodooi.com would be interesting. Companies should come together to create a better-decentralised environment for this industry and not work alone."

Lian has also told a reporter from Blockpaths.com that NFT has to move beyond art, into finance. "NFT is not just about art. It is also way beyond the current hype. The real capability for NFT is not fully tapped on. Its ecosystem and infrastructure are still in the building stage, we will definitely see its true self in the near future."

You can view the full interview at:

Anndy Lian is an early blockchain adopter and experienced serial blockchain entrepreneur who is known for his work in the government sector. He is a best selling book author “Blockchain Revolution 2030” and currently the Advisory Board Member of Hyundai DAC Technology. He plays a pivotal role as the Blockchain Advisor for Asian Productivity Organisation (APO), an intergovernmental organization committed to improving productivity in the Asia-Pacific region. Anndy is also part of the Gyeongsangbuk-do Blockchain Special Committee, Government of Republic Korea, together with industry experts such as Brock Pierce.

An avid supporter of incubating start-ups, Anndy has investments in several traditional companies. He has also been a private investor for the past eight years. With a growth investment mindset, Anndy strategically demonstrates this in the companies he chooses to be involved with. He believes that what he is doing through blockchain technology currently will revolutionise and redefine traditional businesses. He also believes that the blockchain industry has to be “redecentralised”.

Blockpaths.com is a social media marketing company that paves the path for the future by sharing knowledge on blockchain technology and cryptocurrencies. We want to tell the world what blockchain and cryptocurrency can do for us now and in the future. On our platform, we bring you the most credible news and information that is happening in the industry. We also want to showcase the best companies and personalities that will give you the true definition of what this industry is all about.

On top of this, we are also a social media marketing company.